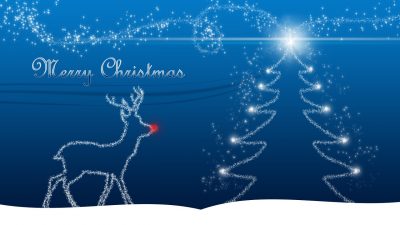 Rudolf The Red Nosed Reindeer is a story of selfless love. It is the real story brought out of tragedy to become the most loved and well known story and song. Read the real story behind Rudolph The Red Nosed Reindeer, and share it with your children (and adults with as child’s heart). It brings hope  that life moves on, even from the most tragic of events, to bring back a brighter future.

A guy named Bob May, depressed and brokenhearted, stared out of his drafty apartment window into the chilling December night. His 4-year-old daughter, Barbara, sat on his lap quietly sobbing. Bobs wife, Evelyn, was dying of cancer. Little Barbara couldn’t understand why her mommy could never come home. Barbara looked up into her dads eyes and asked, “Why isn’t Mommy just like everybody else’s Mommy?” Bob’s jaw tightened and his eyes welled with tears. Her question brought waves of grief, but also of anger. It had been the story of Bob’s life. Life always had to be different for Bob. Being small when he was a kid, Bob was often bullied by other boys. He was too little at the time to compete in sports. He was often called names he’d rather not remember.

From childhood, Bob was different and never seemed to fit in. Bob did complete college, married his loving wife and was grateful to get his job as a copywriter at Montgomery Ward during the Great Depression. Then he was blessed with his little girl. But it was all short-lived. Evelyn’s bout with cancer stripped them of all their savings and now Bob and his daughter were forced to live in a two-room apartment in the Chicago slums.  Evelyn died just days before Christmas in 1938. Bob struggled to give hope to his child, for whom he couldn’t even afford to buy a Christmas gift. But if he couldn’t buy a gift, he was determined a make one – a storybook!

Bob had created an animal character in his own mind and told the animal’s story to little Barbara to give her comfort and hope.  Again and again Bob told the story, embellishing it more with each telling. Who was the character? What was the story all about? The story Bob May created was his own autobiography in fable form. The character he created was a misfit outcast like he was. The name of the character?  A little reindeer named Rudolph, with a big shiny nose.

Bob finished the book just in time to give it to his little girl on Christmas Day. But the story doesn’t end there. The general manager of Montgomery Ward caught wind of the little storybook and offered Bob May a nominal fee to purchase the rights to print the book. Wards went on to print Rudolph the Red-Nosed Reindeer and distribute it to children visiting Santa Claus in their stores. By 1946 Wards had printed and distributed more than six million copies of Rudolph. That same year, a major publisher wanted to purchase the rights from Wards to print an updated version of the book. In an unprecedented gesture of kindness, the CEO of Wards returned all rights back to Bob May. The book became a best seller. Many toy and marketing deals followed and Bob May, now remarried with a growing family, became wealthy from the story he created to comfort his grieving daughter.

But the story doesn’t end there either. Bob’s brother-in-law, Johnny Marks, made a song adaptation to Rudolph. Though the song was turned down by such popular vocalists as Bing Crosby and Dinah Shore, it was recorded by the singing cowboy, Gene Autry. “Rudolph the Red-Nosed Reindeer” was released in 1949 and became a phenomenal success, selling more records than any other Christmas song, with the exception of “White Christmas.” The gift of love that Bob May created for his daughter so long ago kept on returning to bless him again and again. And Bob May learned the lesson, just like his dear friend Rudolph, that being different isn’t so bad. In fact, being different can be a blessing!

But there’s way more to the story of the “most famous reindeer of all.” There’s a brother-in-law, a department store, and a singing cowboy! Huh?

In 1939, the Chicago-based Montgomery Ward department store chain employed as an advertising copywriter one Robert L. May. He was just 34 years old at the time.

May was asked by his bosses to write a Christmas story that they could use as a Christmas promotional give-away. May came up with a 30-plus page booklet, illustrated by co-employee Denver Gillen, which told the story, in rhyming verses, of the misfit reindeer who saves the day.

The “hit” story of Rudolph was a “work for hire” and it took some time before its author, May, could wrangle ownership of the tale from Montgomery Ward. Ultimately May did acquire the rights in 1947 and subsequently wrote two sequels to the original story, Rudolph Shines Again, and Rudolph to the Rescue.

Now, Robert L. May’s brother-in-law was an accomplished musician and songwriter by the name of Johnny Marks. Johnny set “Rudolph” to music.

Marks also wrote some of the most popular Christmas songs of all time including, “Have a Holly-Jolly Christmas,” “I Heard the Bells on Christmas Day,” and many more classics. He was inducted into the Songwriters Hall of Fame in 1981.

While Montgomery Ward distributed over two million copies of Robert May’s “Rudolph” booklet in 1939, and millions more were ultimately given away, it was the recording of “Rudolph the Red-Nosed Reindeer” by film and TV star Gene Autry (“The Singing Cowboy”) in 1949 that blew the lid off the Rudolph phenomenon.

Autry’s recording, the first record ever to go “platinum” by selling over one million units, sold over 30-million copies in the succeeding decades and inspired one of the most popular and enduring TV Christmas Specials by the same name in 1964.

SIDEBAR: In the perennial “Rudolph” Christmas Special, the tale is narrated by “Sam the Snowman” whose voice is that of the legendary folk-singer and actor Burl Ives. Interestingly, Ives popularized another Johnny Marks-penned song,

“Have a Holly-Jolly Christmas” and is associated by many with the Christmas season, especially by children.

Rudolph the Red-Nosed Reindeer Lyrics – sing along with Gene Autry in this utube (words shown on utube): https://youtu.be/GuZr9vMygFU

You know Dasher and Dancer
And Prancer and Vixen,
Comet and Cupid
And Donner and Blitzen,
But do you recall
The most famous reindeer of all?

Then one foggy Christmas Eve
Santa came to say
“Rudolph, with your nose so bright,
Won’t you guide my sleigh tonight?

Then all the reindeer loved him
As they shouted out with glee:
Rudolph the Red-Nosed Reindeer,
You’ll go down in history!

May the spirit of Christmas fill your home…

Long after the tree and wrappers are gone.

Wishing you the Seasons greetings and all the best for 2021.

Father’s day will soon be here. There will be many different feelings when the day arrives. Not everyone will be rushing out to buy that gift with feelings of love and tenderness towards their father…