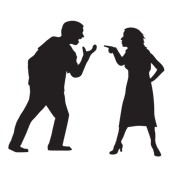 “The New York Daily Mirror started in 1924 and ceased publication in 1963. In an Article; “You Said It”,  in the late 50’s the question was; If a Woman Needs It, Should She Be Spanked? Below shows four of the male responses.

The Chicago Sun-Times was first published in 1948, and is still active.

In an article on Fri., July 22, 1960, a sister writes to Ann Landers. The Heading of the article was called; “A Ping-Pong Paddle Keeps Wife In Line”

The sister was shocked to find out that her sister’s husband spanks her at least twice a month with a ping-pong paddle.

Ann Landers replies; “What in the world is wrong with a husband who finds some phony excuse to spank his wife at least twice a month?” I have never heard of such carryings on and believe me, I am shocked. Is there something mentally wrong with this man? Landers also points out that her sister is also pretty sick.

Landers gives some common-sense information to ‘Simply’, that made me think about just how prevalent these bully tactics still are today, and if they are, why is that so with all the knowledge that is out there about domestic violence?

Is it true that neurotic women who feel the need to be punished seem to attract the type of man who will oblige?  And if so why?

The University of Queensland’s Kim Halford suggests that perhaps three-quarters of a million children witness both parents engaged in domestic violence.

According to one of Australia’s leading experts on couple relationships, Kim Halford, a professor of clinical psychology at the University of Queensland, most family violence does not fit the picture most of us have when we imagine domestic violence – a violent man severely beating up his partner to control her. But gender symmetry did emerge in violence studies published in 2010-11 by Halford that focused on couples at the start of their relationships, newlywed couples and couples expecting a child together. Even with these early relationships, about a quarter of the women admit they have been violent towards their partners – just as many as the men. Halford suggests that perhaps three-quarters of a million children every year in Australia are witnessing both parents engaged in domestic violence.

Swedish politician and proud feminist who holds an important post as chairwoman of the party Moderate Women, Eva Solberg when presented with her government’s latest strategy for combating domestic violence.  Like similar reports across the world, this strategy assumes the only way to tackle domestic violence is through teaching misogynist men (and boys) to behave themselves. (The definition of ‘Misogynist’ is a person who dislikes, despises, or is strongly prejudiced against women.)

The government felt that eradicating sexism was the solution to the problem, but Solberg reasoned that they knew through extensive practice and experience that attempts to solve the issue through this analysis have failed.  She felt that they had failed because violence is not and never has been a gender issue.  She referred to the Partner Abuse State of Knowledge (PASK) project that shows that we must recognise the fact that domestic violence, in at least half of its occurrence, is carried out by female perpetrators.

One of the key patterns that emerged from PASK, Solberg said, was that violence in the family was an inherited problem and children learned from watching the violence of both their parents.

The Partner Abuse State of Knowledge project, or PASK, is the most comprehensive review of the scholarly domestic violence research literature ever conducted. The unprecedented study spanned three years, was conducted by 42 scholars at 20 universities and research centers and includes information on 17 areas of domestic violence research. It affirms, among other things, that women perpetrate physical and emotional abuse at comparable rates to men.

No one denies the need to protect the vulnerability of women and to take critical steps to protect and ensure their safety.  But here too, in Australia, we use statistics that are distorted and funding to attempt to solve the issue through the analysis that domestic violence is a gender issue, and denying the reality of the violence being witnessed by many Australian children.  According to the Australian Institute of Criminology figures, one woman is killed by an intimate partner or ex-partner every nine days. One man is killed by his partner about every 30 days. So, it is important to acknowledge that male violence is likelier to result in injury or death than female violence towards a partner.

In 2016 we looked at a $30 million television campaign the Australian federal government ran, which showed a little boy slamming a door in a little girl’s face.  A series of pieces of acting that clearly expresses the typical characteristics of violence perpetrated by woman followed. The whole thing based on the erroneous acceptance that domestic violence is caused by a disrespect for women, yet our government spent at least $700,000 in funding for research and production of this campaign.

Augusto Zimmermann, a commissioner with the Law Reform Commission of Western Australia, who explains that AVOs can be used to force men to leave their homes and deny them contact with their children. Often men are caught in police proceedings and evicted from their homes by orders that are issued without any evidence of legal wrongdoing. “It is a frightening reality that here in Australia a perfectly innocent citizen stands to lose his home, his family, his reputation, as a result of unfounded allegations. This is happening to men every day (as a consequence) of domestic violence laws which fail to require the normal standards of proof and presumptions of innocence,” Zimmermann says, adding that he’s not talking about genuine cases of violent men who seriously abuse their wives and children but “law-abiding people who have lost their parental and property rights without the most basic requirements of the rule of law”.

It is often claimed that women hit only in self-defense, but Halford points out the evidence shows this is not true. “In fact, one of the strongest risk factors for a woman being hit by a male partner is her hitting that male partner. It’s absolutely critical that we tackle couple violence if we really want to stop this escalation into levels of violence which cause women serious injury,” he says. Of course, the impact on children is the other important reason to make couple violence a significant focus. Children witnessing any form of family violence, including couple violence, suffer high rates of mental health problems and the children are more likely to be violent themselves.

The article links below show more detailed information on statistical and media distortions.

I had a client at one time that came from parents who engaged in domestic violence behaviour.  Her history showed that she had 3 marriages, each with domestic violence as the break-up factor.  She had a loving non-violent man that she worked with, that was always asking her to marry him.  But she told me, that he was a lovely person but boring.  When I asked her to elaborate on that, she said that she hated the violence in her previous marriages, but afterwards, her partners would buy her an expensive ‘sorry’ present which she loved and found exciting.

Violence can leave us with symptoms of a very frightening or deeply distressing or disturbing experience of the initial causal event.  The initial triggering event has resulted in a wound or injury that is now caught in a psychological and neurological loop that has remained hair-trigger, and which easily activates or sets off at the slightest provocation or cause, bringing back all the causal event as though it is still happening in the present time. To me it is a case of breaking that psych-neuro-loop from the original happening to a place of memory where, whilst you still remember what happened, you can talk about it without triggering those earlier dis-ease emotions with the ability to react differently.

The other thing that happens after your release those earlier emotions, your next relationship doesn’t have to suffer the consequences of what your first relationship was like. #Hypnotherapy may help you to do just that.

Domestic violence: data shows women are not the … – The Australian

* all thoughts in my emails, blog articles, writings on my website or elsewhere, are mine alone. They should not be seen to be or interpreted as the thinking of the current National Executive of the AHA.

Child Sexual Abuse Emotions Released by Hypnosis Child Sexual Abuse is prevalent throughout the world. Beware of the Internet.  You do not know who you are talking to, nor do your children.  Chat Rooms are fun, but they can lead …

Slavery Past and Present is rife.

I was looking to find an author who wrote a book many years ago.  I put my wording into Google which had me clicking on many websites that came up.  I checked a number of them to see if I …