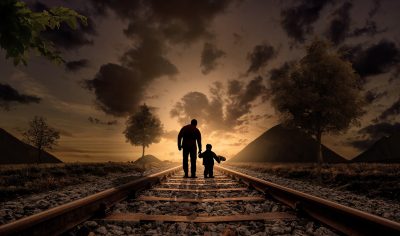 Father’s day will soon be here.  There will be many different feelings when the day arrives.  Not everyone will be rushing out to buy that gift with feelings of love and tenderness towards their father.

I can’t remember my father.  I have a picture on a chest of drawers where he is looking at me, while my mother was holding me.  I look about four months old.  What he was like I do not remember.  He wasn’t a part of my life growing up.  I never had bad memories about him as I was too little to remember.  My mother did though, saying he had a drinking problem.  She said that he could do in three days, what took others a week to do, but then he was drunk the rest of the week.  I wonder what caused this?  I suspect why, but I can’t be sure.

My brother is a father.  His children don’t like him.  They say that he is selfish and only ever thinking of himself.  He has had four relationships that I know of although I only met his first wife and children.  What will their (the children now grown up) feelings be like on Father’s day?

When I reflect on statistics – as a Child Sexual Assault Counsellor at that time, one in four girls are sexually abused, and one in six boys.  Most by a family member or a friend known to the family and most abusers are men.  Of course there are the Paedophiles as well.  Some would be fathers.  I wonder what these children are feeling like on Father’s day?

Some fathers are physical abusers.  Wives and children from these homes are beaten, scared and fearful.  I wonder what these children are feeling like on Father’s day?

The above is not always the sole case of our misery either.  What about the soldier that goes to war?  The shooting, watching people get killed, watching their mates get killed.  They come home from war and many years later they still have the feelings from their experiences.  (Called Post Traumatic Stress Disorder (PTSD).  I wonder what their children are feeling on Father’s day?

What about the Father that has suffered an injury and feels pain most days that make him short-tempered and angry all the time?  I wonder what his children are feeling on Father’s day?

I would suppose none of these Father’s opened their eyes at birth and said; “When I grow up I will become an abuser”, (either physically or psychologically or anything else for that matter.)  And many abusers suffered abuse themselves.

That doesn’t mean I forgive them for what they are doing or have done.  Forgiveness is not my job.  I see abusers as people that live in their own hell.  When you love and care and are loved and cared for in return, there is a sort of warm nice safe feeling about your relationship.  Abusers are not loved.   Nor do abusers have warm nice feelings.  They don’t live in harmony inside their bodies.  Their life is not in balance. They have hate, anger, a wanting to lash out and control. I don’t need to forgive them, the Universe is already punishing them for the way they feel, and if they dealt with their feelings that change them, then there is nothing to hate any more.

But what of the people around the abuser that are affected by their abuse?  Those left with the fear, anger, low self esteem, guilt, shame…sometimes many years later when they have grown up?  Some turn to ‘band aids’.  They abuse alcohol, take drugs, gamble and end up in abusive relationships themselves, blaming themselves or others for their misfortune.  We do need to heal our self from the affects of abuse.

When I ask a client; “Who put the feeling in you?”  Often the answer can be; “They (the abuser) did.”  That is not true.  The abuser set the circumstances that got you to feel a range of emotions.

No.  It is not true.  You put the emotions in to your body, so mostly you can take them out again (with the help of a specialist able to help you in this area).  Long-term or extreme abuse, may have been dealt with on many levels and feelings about events are no longer there, but through the habit of panic attacks for years, may need to be approached through learning how to stop those automatic body reactions.  This has been done successfully.

The main thing to remember is the power of every person is always in the ‘NOW’, not in their history.  If you were unfortunate enough to miss out on a favourable upbringing or other unfavourable happenings, it is now up to you to change things.  You can now direct your own life as to how you want it to be.  You are now in charge of your life.

Logically you may understand this on a head level (our conscious mind).  But it is another story at the subconscious level if those feelings your past created for you have not been released.  Sometimes we tell ourselves it is the past and we are now over all of that.  But that is not necessarily true.  What does it feel like to be in your body?  Do you feel happy… are you easy going… do you suffer from blood pressure… are you a perfectionist… Are you short tempered… do you drink more than you really think you should… do you gamble too much of your hard-earned savings… does your life suck?

I know of people that have made a financial success of their lives.  In the process they have pushed themselves to extremes, they have smoked like a chimney, having to do it all themselves as no one is good enough or can be trusted to do it well enough.  Are they feeling comfortable in their body?  What does it do to their health?  Oh! Yes! They can afford the best medical treatment, the private nurse at home, the oxygen tent… but they can’t pay to buy health.

Maybe you might consider that this Father’s day you deserve to treat yourself.  Your body is your vehicle in your lifetime.  You need to treat it as well as you can or you are not going to have a good ride along life’s path.  Seeing someone that can help you to release unwanted feelings or stresses is the best gift you can give to yourself.  The gift is not only to yourself, like when you throw a pebble in a pond, the ripples this causes affects everyone within the range of energy around you.  As the saying goes; “When you change, the whole world changes with you.”

When there is no father for you to accolade on Father’s day, don’t despair. You are not alone and life goes on despite that. But the one thing I suggest you might like to do, is release any feelings and emotions that cause you to feel unhappy about your past, not just on Father’s day.

Check The Dangers of taking Your Medication