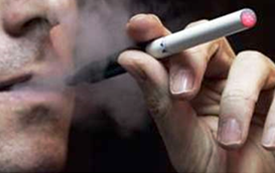 ELECTRONIC CIGARETTES (e-Cigs).  How safe are electronic cigarettes – and if so, how valid is the research?

HISTORY OF E-CIGS:
The claim that E-cigs became available in 2007 only refers to the first international patent.  In 1963, Herbert Gilbert patented a smokeless non tobacco cigarette.  Gilbert’s device involved no nicotine.  Smokers of Gilbert’s device enjoyed the flavour and steam.  Attempts to commercialise Gilbert’s invention failed and his product fell into obscurity.  However, it deserves a mention as the earliest patent for an electronic cigarette.

Vlachos also complained that his idea has been stolen from him in 2003 by a Chinese girl who proposed him to meet with her uncle in China who was interested by his idea.

Hon Lik, a Chinese pharmacist, is wrongly credited with the invention of the first generation electronic cigarette.  Lik claims that he came up in 2003, with the idea of using a piezoelectric ultrasound-emitting element to vaporise a pressurized jet of liquid containing nicotine diluted in a propylene glycol solution. This design produced a smoke-like cold vapour that could be inhaled and provides a vehicle for nicotine delivery into the bloodstream via the lungs.

The device was first introduced to the Chinese domestic market in May 2004 as an aid for smoking cessation and replacement. The company that Lik worked for, Golden Dragon Holdings, changed its name to Ruyan (如, literally “Resembling smoking”), and started exporting its products in 2005–2006 before receiving its first international patent in 2007.

These ads feature today’s equivalents of the Marlboro Man and the Virginia Slims woman, depicting e-cigarette use as masculine, sexy or rebellious. E-cigarette ads have appeared in magazines that reach millions of teens.  Like cigarette companies have long done, e-cigarette makers portray use of their products as sexually attractive.

The web site for blu eCigs has featured a cartoon pitchman named “Mr. Cool.” It was reminiscent of the Joe Camel cartoon character that so effectively marketed cigarettes to kids in the 1990s.

DRAMATIC INCREASE IN E-CIGARETTE-RELATED CALLS TO POISON CENTERS
The Center For Disease Control (CDC) in a press release April 2014 advises that more than half (51.1 percent) of the calls to poison centers due to e-cigarettes involved young children under age 5, and about 42 percent of the poison calls involved people age 20 and older.

The analysis compared total monthly poison center calls involving e-cigarettes and conventional cigarettes, and found the proportion of e-cigarette calls jumped from 0.3 percent in September 2010 to 41.7 percent in February 2014.

VAPING AND HEALTH:  What do we know about E-Cigarettes?

Pulmonologist, Laura Crotty Alexander, (A Pulmonologist with the San Diego Veteran’s Affairs – Pulmonology is a medical specialty that deals with diseases involving the respiratory tract).  A couple of years ago she started getting questions her patients – “Are e-cigs safer than conventional cigarettes, and should they switch?”  Advertisements claim; ‘e-cigs offer health benefits – after all, all that is being inhaled is ‘harmless water vapour’.

Many environmental health scientists aren’t so sure. Toxicologist, Maciej Goniewicz says this is vapour, but only a small proportion of it is water.  He says they are made up of the main ingredients of propylene glycol and/or glycerine.  When heated, these solvents produce an aerosol resembling cigarette smoke, and most e-liquids also contain flavourings and preservatives. Goniewiccz says; “We don’t know about the real health effects on the users of this product, especially on long-term users.
Alexander says; “The vapour does not appear to be benign, but it does seem to be the lesser of two evils when compared to cigarettes.

It’s a case of weighing up potential risks against potential health benefits.  As pointed out, small and sometimes not so small risks are association with all sorts of pharmacological and other health and social interventions, but the necessary precautionary principle needs to be weighed against potential benefits.  Of course saying something is safer than smoking cigarettes isn’t exactly setting a high bar.  Wouldn’t it be better to give up smoking altogether?

If we look at the idea of making these available in Australia, we can learn from the USA where it says that use among youth approximately doubled between 2011 and 2012, by which time an estimated 1.78 million students in grades 6-12 had tried the devices. (CDC Phanie/Alamy)©

The American Heart Association’s policy recommendation calls for stronger new regulations.  They feel that as e-cigs contain nicotine they are tobacco products and should be subject to all laws that apply to these products, and call for new regulations to prevent access, sales and marketing of e-cigs to youth, as well as more research into the product’s health impact.  Their concern is that e-cigs may be a gateway to traditional tobacco products for the nation’s youth, and could renormalise smoking in our society.

The role of e-cigs in smoking cessation has split Australian experts.  Whilst Prof.Wayne Hall, chair of the Centre for Youth Substance Abuse Research at the University of Queensland, said that those supporting a ban on e-cigarettes had “lost sight of the possible gains to smokers.”   He called for the battery-powered devices and the “e-juices” they vaporise to be “made legally available in Australia”, to ensure their safety and quality.

Currently it is illegal to sell or supply nicotine-containing e-cigarettes and e-juices in Australia, but experts agree the products are being widely purchased over the internet.
He does make a note of the need for products to meet quality control as nicotine ranges from none at all to 20 times the content of an ordinary cigarette.  Professor Hall was one of almost 60 doctors who petitioned the WHO not to class e-cigarettes in the same category as tobacco cigarettes.

However, Prof. Simon Chapman, professor of public health at the University of Sydney, argues the devices are more likely to prolong smoking addictions and renormalise smoking culture.

Professor Chapman and 128 other health professionals warned that the tobacco industry was behind a disingenuous push to have e-cigarettes seen as smoking cessation aids.

They drew parallels to the mistakes of history, saying public health experts had mistakenly embraced cigarette filters and “low tar” cigarettes as “harm reduction” strategies in the past, which were actually “designed to promote cigarette sales by reassuring a concerned public that the new products were safer”.

The letter cited evidence that most e-cigarette users continued to smoke tobacco cigarettes, albeit fewer, and were less likely to stop smoking than non-users.

Professor Chapman told MJA InSight.  “The available epidemiology doesn’t show that just cutting back on the number of cigarettes translates into reduced harm. It’s the duration of smoking that matters most for lung cancer”

Ninety percent of the world’s e-cigarettes are made in China.  Experts warn however, that poorly manufactured devices can vaporize heavy metals and carcinogens alongside the nicotine.

In a grimy workshop, among boiling vats of chemicals, factory workers are busy turning stainless steel rods into slender tube casings, a crucial component of electronic cigarettes. Not long ago, Skorite Electronics was a tiny firm struggling to produce pen parts. Today, it is part of an enormous — and virtually unregulated — supply chain centered here that produces about 90 percent of the world’s e-cigarettes.

One study found e-cigarette vapor that contained hazardous nickel and chromium at four times the level they appear in traditional cigarette smoke; another found that half the e-cigarettes sampled malfunctioned and some released vapor tainted with silicon fibers.

It’s never too late to claim back your health.
If you are already hooked –
come see me to ensure you will remain healthy.