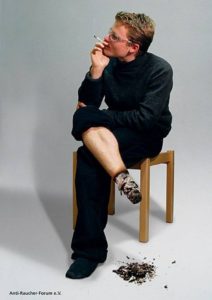 You may have heard of the saying; “The cigarette does the smoking – You’re just the sucker!”  It was certainly true for me before I became a non-smoker.  What started off as a habit… now had its truly ugly addiction fixed on the smoker… Me!  Whether it is smoking tobacco, e-cigs or marijuana, it is like you have become a slave to your addiction.  Is that what you truly want?  Do you systematically want to damage your body?  Of course not!  Is it helping you cope with stress?  Maybe?

Research will tell you that smoking just one to four cigarettes a day almost triples a smoker’s risk of heart disease and lung Cancer.  Cigarette smoke can turn normal breast cells cancerous by blocking their ability to repair themselves, eventually triggering tumour development.

Smoking triples the risk of developing, a carcinoma… one of the most common forms of  skin cancer.

As well as reducing your risk of getting a smoking-related illness, there are other benefits to quitting smoking such as…

Your sense of taste and smell improve. (without the need to put on weight.)

Your heart will be less strained and work more efficiently.

Stopping smoking is one of the single biggest things you can do to improve your health.

I started smoking at the age of 15 when I started work – it was the ‘in-thing’ to do and made me feel grown up.

As the years went on, I noticed that every year I would get a cold which went into bronchitis. Each year the bronchitis was harder to get rid off. One year it went into Pleurisy.  That hurt.  But I got over that and went back to smoking.  After all… I didn’t want to stop smoking.  It was part of who I was.

What was interesting for me to learn is that although I have stopped smoking for 30+ years, undergoing an exploratory chest X-Ray (for an upcoming double knee replacement surgery), the X-Ray showed that I had at one time had pleurisy these many years later.

Various family members who were smokers suffered from stroke… leg amputation…. Lung cancer… and a friend from emphysema…  One day my mind said:  “What are you going to do, wait till you get there?”  That was when I decided to become a non-smoker.

If you look at my video testimonial’s page you can hear a client who smoked approximately 45 a day, sometimes up to 80 – 90 on a weekend who is now a non smoker after two sessions. Another client if you scroll down advises that after he came another 8 people followed from his office – all stopped on the first session.  If they can do it, so can you.

So don’t leave it to become a statistic.  *Most people when they leave my office, have no craving, no withdrawal symptoms, just not wanting to smoke anymore – and no putting on weight by putting food in your mouth instead.

* And that goes for people who have been told by their doctor that if they don’t give up smoking, they won’t be here next year after smoking for most of their life. But I can’t fix something that I don’t know about, so I get as many details from you as possible to check with your subconscious mind that any detrimental happenings in your past life history are no longer affecting you today that would prevent release for you.

If you don’t want to read about all the negatives about your addiction that research tell us – stop reading here. After all you already know you are interested to stop smoking and the below will no longer be a problem. The good news:  The Sub-Conscious is able to put in; No craving… No withdrawal… Remove all the psychological feelings of ever having been a smoker and make sure you don’t put on weight.

Daily smokers have twice the risk for major depression.  Smoking And Depression Weakens the Immune System  … cigarette smoke can weaken your bones and increase your risk for fractures.

A lit cigarette is like a chemical factory, releasing poisonous fumes into your lungs and air.

For example, carbon monoxide decreases the amount of oxygen in your blood. This means your heart has to work harder to pump blood around the body.  Tar condenses into a brown sticky substance that deposits in the lungs.   Tar clogs up the small hairs (cilia) that protect and clean the lungs.

Nicotine causes addiction, making it difficult for some people to stop smoking and avoid the illnesses it causes. Even when faced with amputation if they don’t quit, some smokers cannot give up.  There are 4,000 + chemicals in cigarettes.

Formaldehyde can cause cancer and damage to your skin, lungs, stomach and bowels.

Hydrogen cyanide is one of the most toxic chemicals in cigarette smoke. It can cause headaches, nausea, dizziness and vomiting.

One in ten moderate smokers and almost one in five heavy smokers (more than 15 cigarettes a day) may die of lung cancer.

Cadmium in a cigarette can cause brain, kidney and liver damage.  Lead in a cigarette can cause damage to the brain, kidney and red blood cells.  Smoking accelerates the hardening and narrowing process in your arteries.  Or it can cause a blood clot in the arteries supplying the heart, which can lead to a heart attack. Around 30 per cent are caused by smoking.  Smoking can cause the vessels to the brain to become blocked, which can lead to collapse, stroke and paralysis.

If the kidney arteries are affected, then high blood pressure or kidney failure results.   Blockage to the vascular supply to the legs may lead to gangrene and amputation.  Smokers tend to develop coronary thrombosis 10 years earlier than non-smokers, and make up 9 out of 10 heart bypass patients.

They can get chronic bronchitis – which is coughing with a lot of mucus.  Or worse, emphysema – a breathlessness caused by damage to the air sacs.  A friend of mine died from that.  Not a nice thing to watch someone go through.  And although this friend was a millionaire – money can’t buy health.  (It’s estimated that 94 per cent of 20-a-day smokers have some emphysema when the lungs are examined after death, while more than 90 per cent of non-smokers have little or none.)

Alveoli are the place where oxygen passes from the lungs into the bloodstream. Human infants are born with only about one-fifth of the 300 million alveoli they will need as adults. They construct almost all those 300 million alveoli between birth and age 8.  So if you are pregnant and smoke, or are exposed to second hand smoke while carrying your baby in the womb, the baby is at risk that after birth it will develop hyper-reactive, or “ticklish,” airways, which typically occurs in children and adults with asthma.

Did you know that Nicotine Exposure During baby’s Development may also Lead To Hearing Problems for your baby?

Heavy smokers are twice as likely to get macular degeneration, resulting in the gradual loss of eyesight.  Smokers run an increased risk of cataracts.

Smoking stains your teeth and gums. Smoking increases your risk of periodontal disease, which causes swollen gums, bad breath and teeth to fall out. Smoking causes an acid taste in the mouth and contributes to the development of ulcers.

Smoking also affects your looks: smokers have paler skin and more wrinkles. This is because smoking reduces the blood supply to the skin and lowers levels of vitamin A.

For men in their 30’s and 40’s, smoking increases the risk of erectile dysfunction by about 50 per cent.  Erection can’t occur unless blood can flow freely into the penis, so these blood vessels have to be in good condition.  Smoking can damage the blood vessels and cause them to degenerate: nicotine narrows the arteries that lead to the penis, reducing blood flow and the pressure of blood in the penis. This narrowing effect increases over time, so if you haven’t got problems now, things could change later.  Erection problems in smokers may be an early warning signal that cigarettes are already damaging other areas of the body – such as the blood vessels that supply the heart.

The study “Bullous Lung Disease due to Marijuana” also finds that the bullous lung disease can easily go undetected as patients suffering from the disease may show normal chest X-rays and lung functions. High-resolution CT scans revealed severe asymmetrical, variably sized bullae in the patients studied. However, chest X-rays and lung functions were normal in half of them.

On ABC Health Minutes Dr Norman Swan advised that the review of the medical literature shows cannabis use is linked to psychotic illness and the more cannabis, the higher the risk.

*Note of caution:  Marijuana seems to be one of the highest used today for relaxation purposes.  There are more and more people coming to give up the use of marijuana because of symptoms that include memory loss and hearing voices.  Are you willing for this to happen to you?

ELECTRONIC CIGARETTES or e-cigs
Don’t be fooled by all the hype about smoking e-cigs being better for you.  Remember the marketing about cigarettes having nothing to do with illness or lung cancer?  The bottom line is making money out of you, they are really not interested in your health.